You are here: Home / Packers / Jennings says he is “ready to go” 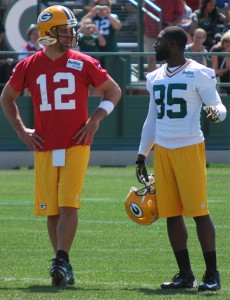 Despite not practicing Thursday and being limited in practice Friday, Green Bay Packers wide receiver Greg Jennings says he is “ready to go” for Monday’s game against the Seattle Seahawks.

Audio: Jennings on his injury and game status :15

While Jennings has not seen an in-game snap since week one against the San Francisco 49ers, he has tested himself in practice to try to show if there are any lingering effects of his groin injury.

While he admits the test in practice is much different from an actual game, he feels confident in playing inside CenturyLink Field on Monday night.

Audio: Jennings on testing his injury in practice :20

His groin injury is that of a difficult one, as Jennings admits he has had setbacks during the week.  The injuries so far this season have been frustrating  for the wide receiver, as he has suffered a concussion and now a groin injury.

Audio: Jennings talks about his season so far :15

If Jennings does get the nod from head coach Mike McCarthy to play in the Monday night game, Jennings says he is not concerned about the possibility of losing his timing with quarterback Aaron Rodgers.

Audio: Jennings on timing with Rodgers :13

The Packers and Packer Nation can only hope that Jennings, who ranks 7th all-time in Packers’ receptions, will be ready to go Monday night.