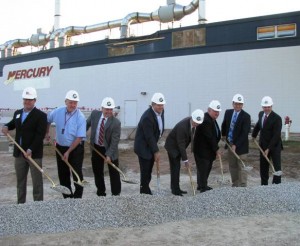 A ceremonial groundbreaking is held this morning for the $20 million project. Three years ago officials in Fond du Lac were fighting to keep Mercury from leaving the state. Since the company decided to stay, it has hired over 1,000 additional workers. City Manager Joseph Moore is pleased to see the commitment from Mercury. “It is a commitment by Mercury … we’re excited about the job opportunities.”

Fond du Lac County Executive Al Buechel was one of those who worked with Mercury officials to make sure they wouldn’t leave for Stillwater, Oklahoma in 2009. “Mercury undoubtedly has decided Fond du Lac is their home and they’re making investments here that are way and beyond what we expected three years ago.”

Mercury President Mark Schwabero used the words growth and commitment to describe both expansion projects in their product development and engineering area, the other in component manufacturing and fabrication. Schwabero says he’s excited to see all the new employees walking through the door. “It’s a lot better seeing new people coming through the door than when people were going through layoffs and reductions.”

One of the shovels used to turn earth during the groundbreaking ceremony was also used when ground was broken for the current plants 50 years ago. The two projects should be completed by the end of next year.