You are here: Home / News / Panic buttons installed in the Capitol 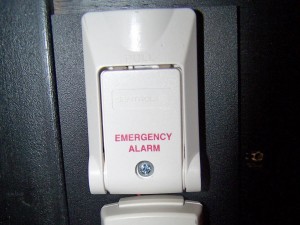 One of the many panic buttons installed in state Capitol offices. (Photo: WRN)

Concerns about safety at the state Capitol have resulted in hundreds of panic buttons being installed throughout the building. The state Department of Administration says the devices were put in place over the last several months in response to incidents reported by lawmakers and staff members.

DOA spokeswoman Stephanie Marquis says Capitol Police have received numerous complaints from workers in the building who have felt threatened by people coming into legislative offices and trying to step behind their desks, or who have followed them outside of the office and used aggressive language. She says the buttons are meant to be used when a person feels there is a threat to their personal safety and they are unable to get away from the situation.

The devices have been installed in several offices, along with other rooms used by state government. Marquis says most were installed at the request of staff who want a direct connection to Capitol Police in the event of an emergency.

The cost of installation is about $103,000, which will be split between the Legislature, Supreme Court, and the state.