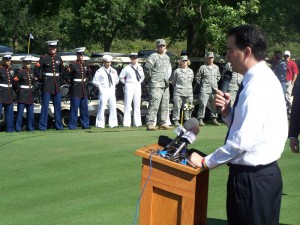 Governor Scott Walker says he remembers the aftermath of the September 11th attacks and the impact it had on the country. He also remembers gathering with those in his community 11 years ago in a show of unity and hoping that his kids wouldn’t just remember what fell down on, but how united the country was and what was built up on that day.

Walker attended several ceremonies across the state Tuesday marking the 11th anniversary of the attacks, while flags across Wisconsin were also ordered flown at half-staff. During a ceremony in Madison honoring wounded veterans, he called the tragedy a pivotal moment for many lives.

Walker says we must remember the over 3,000 killed in the terrorist attacks, as well as the over 160 Wisconsin troops who have died fighting overseas and the over 33,000 troops from the Badger State who have been deployed since 9-11.