You are here: Home / Packers / Rodgers was no different than Cutler

The more Chicago QB Jay Cutler got hit, the more frustrated he got.  It 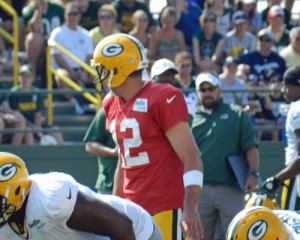 Cutler was seen leaving the field yelling at his offensive linemen.  He even pushed LT J’Marcus Webb on one occasion.  It looked bad and I heard many Packers fans discussing Cutler’s poor sportsmanship over the next 24 to 48 hours.

But what about Aaron Rodgers?  The Green Bay Packers quarterback was also frustrated after throwing his first interception.  The pass was intended for James Jones, but the wide receiver changed his route and it led to the turnover.  Rodgers was then seen by a national television audience as well as fans on hand at Lambeau Field, shouting down his teammate.

No quarterback likes getting hit by rushing lineman or intercepted, especially if it isn’t their fault.  But there are times that those turnovers are the fault of the quarterback and you can bet his teammates aren’t in his face, jumping up and down and wondering what he’s doing.

Mike McCarthy said it’s not a big deal and that Rodgers and Jones talked the play over when they reached the sidelines.  If only Rodgers had waited until he got to the sidelines to discuss the play with Jones.  That would have been the right way to do it.

James Jones may tell people everything is good between he and Rodgers.  That’s because Jones will take the high road.  But nobody likes getting taken to task by a teammate and if it continues, well let’s just say respect could be on the line.

Rodgers is a great guy and his teammates love him.  Let’s hope it stays that way.  Packers fans don’t want their quarterback to be like “Jay”.