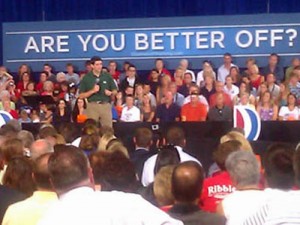 The Republican Congressman from Janesville says the country is facing a looming debt crisis, unless federal spending gets under control. He says job creators need a strong signal before they’re willing to take on more risk, and “one of the worst things hitting our economy today is uncertainty.”

Ryan says massive tax increases and huge defense cuts looming on the horizon send a bad message, especially to the country’s enemies, and he and Republican presidential nominee Mitt Romney believe in “peace through strength.”

Ryan held a town hall meeting at the Cornerstone Community Ice Center in Ashwaubenon. He also talked about the need to keep the country’s promises to military members when they come home and the importance of producing more energy in America.