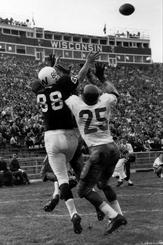 On October 14, 1961 the Badgers welcomed the Oregon State Beavers to Camp Randall for their first ever matchup. The Beavers had been ranked #17 in the nation at the beginning of the season but quickly fell from the top 25 after dropping their first two games. Oregon State had bounced back from those early losses with a huge win over Idaho and the Beavers entered Camp Randall feeling confident they were back on track.

After dominating the first half on both sides of the ball, Wisconsin had a 23-0 lead to start the 3rd quarter. It was a lead that wouldn’t last long. Oregon State began their comeback with back to back touchdowns in the 3rd. Early in the 4th, the Beavers went deep and scored a 36 yard touchdown that made the score 23-20. With less than 2 minutes left in the game, Oregon State was driving again but Wisconsin’s defense had stiffened. With less than 2 minutes left in the game, Wisconsin stopped the Beavers on a crucial 4th and 2 play. The Badgers took over on downs, ran out the clock and took the win.

WRN Sports Director Bill Scott spoke with former UW athletic director and College Football Hall of Famer Pat Richter about the game. Richter was a major force in the game, catching eight passes for 137 yards in the first half. Richter, Wisconsin’s all-time leading wide receiver, recalls this victory as a good reminder to never take a lead for granted, “You cannot underestimate how good [your opponent] can be. You just can’t take any plays off,” said Richter.

The 1961 Badgers went on to earn a 6 and 3 record, their first winning season since 1959. Wisconsin wouldn’t face Oregon State again until 2011, when the Badgers defeated the Beavers 35 to 0.