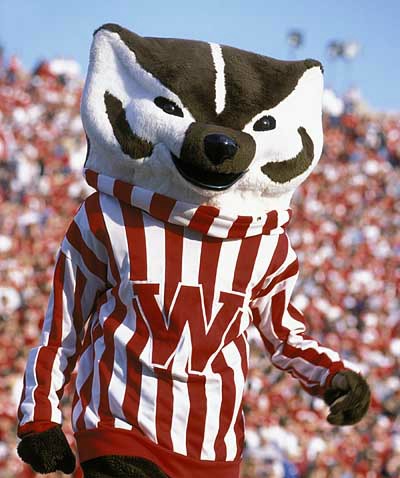 It was in 1949 that an enthusiastic University of Wisconsin cheerleader decided to don a paper-mache badger head and a cardinal and white sweater during the homecoming pep rally. From then on Buckingham U. Badger, or Bucky for short, would become a well-known character in college sports. Wisconsin fans have come to expect an enthusiastic response from Bucky every time the Badgers score at Camp Randall.  With every point put on the board, Bucky does a push up.  On November 13, 2010, Bucky did 83 consecutive push ups when the Badgers beat the Indiana Hoosiers, his current record.

Throughout the years Bucky has moved beyond sporting events to become a regular participant in activities throughout Wisconsin.  Each year, seven students fulfill more than 600 requested appearances for Bucky.  They work as a team, practicing every week to maintain their physical fitness and to brainstorm ideas for entertaining the crowds.

WRN Sports Director Bill Scott spoke with former Bucky Badger Sam Albiero about what it means to put on the Bucky costume.  Albiero served three years as Bucky. “People are still so excited to see you everywhere you go and anytime there’s a break, anytime they get distracted, or whatever [it’s] what’s Bucky doing? What’s he up to now?…He’s got to be doing something entertaining,” said Albiero. Despite long hours and sometimes extreme temperatures, Albiero says being Bucky is very rewarding and he would’ve continued for many years if he could have.

In 2006, Bucky Badger was inducted into the Mascot Hall of Fame’s college division.  To be selected, mascots must demonstrate a positive impact on their community.  The Bucky Badger team also competes every year in the UCA College Mascot National Championship.  Bucky took second place in 2008, his highest ranking to date.