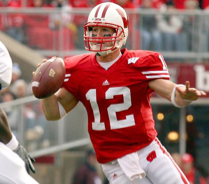 After growing up in Hartland as a Badger fan, quarterback Tyler Donovan had waited a long time to get his turn at Camp Randall.  It finally came in 2006, when he started the last two regular season games after John Stocco was injured. With a big win in Iowa City, and another win against non-conference foe Buffalo, Donovan had established himself as a credible leader.  On August 22, 2007, the fifth-year senior was named the starting quarterback, over junior Allan Evridge, a transfer from Kansas State, just 10 days before the start of the season.  On September 1, 2007 Donovan led the #7 ranked Badgers to a 42-21 victory over the Washington State Cougars. He completed 19 of 29 passes for 284 yards and three touchdowns.

WRN Sports Director Bill Scott spoke with the voice of the Badgers Matt Lepay about Donovan’s accomplishments leading the Badgers.  He remembers Donovan didn’t have great size, but called him tough as nails admiring, “…his ability to scramble out of trouble and to turn a sack into a big play.”

The win over the Cougars marked the first of five straight victories for the Badgers.  Wisconsin ended up with a 9 and 4 regular season record.  For the season Donovan passed for 2,607 yards, completing 193 of 333 passes and 17 touchdowns.  Donovan went on to lead the Badgers in the Outback bowl against Tennessee.