You are here: Home / Packers / Should the Packers trade Jennings?

I read an outstanding story in the Milwaukee Journal Sentinel this morning, a 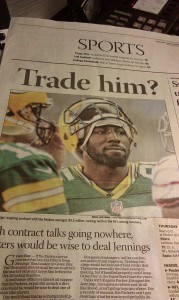 piece written by sportswriter Bob McGinn.  The story suggests the Packers, who won’t likely be able to resign wide receiver Greg Jennings, should trade him and get something for him now.

Jennings current deal expires at the end of this season and averages $9.2 million.  He’s likely eyeing a deal that would pay him more than $15 million a season on average.  Talks between the Packers and Jennings agent have gone no place.

Jennings has been relatively healthy over his career, but he’s had a difficult time with injuries this year.  He isn’t expected to play tonight against the Bears after suffering a groin injury last week against San Francisco.  McGinn suggests at age 29, Jennings could continue to struggle with injuries.

The Packers have other players that they’ll have to extend soon, led by Aaron Rodgers and Clay Matthews.  They likely won’t have enough left to pay Jennings the kind of money he wants and probably deserves.