You are here: Home / Badgers / Stave takes over at QB for Badgers

It was one of the worst kept secrets in Madison this week.  Redshirt freshman 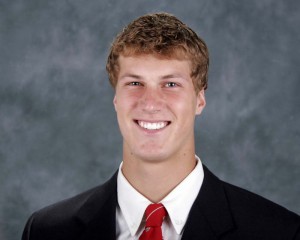 Joel Stave (Whitnall High School) is taking over at quarterback for the Badgers when they host Texas-El Paso on Saturday at Camp Randall Stadium.

Stave replaces Danny O’Brien, who started the first three games for Wisconsin (2-1), but was benched at halftime last week against Utah State.

The Badgers are 2-1, but they’ve struggled offensively this season.  They’ve already switched offensive line coaches and are starting to see some improvement.

Running Back Montee Ball’s numbers are proof of the offense struggling.  Without any consistent quarterback play, teams have been able to stuff the box and play the run.  Ball, who averaged 5.6 yards per carry last season, has seen that number drop to 3.8 this season.

This is Wisconsin’s final non-conference tune-up.  After Saturday’s game, the Badgers open Big Ten play on the road at Nebraska on Sept. 29.