You are here: Home / News / Unions weigh in on Capitol protests 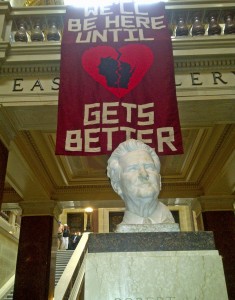 A pair of police unions have stepped into the simmering Capitol protest controversy. Unions representing Madison officers and Dane County deputies have issued a letter critical of recent enforcement efforts against Capitol protests.

Under the direction of new Capitol Police Chief David Erwin, officers have arrested and ticketed dozens of demonstrators taking part in a daily sing-a-long in the rotunda. Those individuals are accused of violating a rule that requires groups to obtain a permit from the state. Tickets have also been issued to individuals who are holding up signs or draping banners over railings.

“People are being cited for activities such as quietly carrying a sign in the state Capitol,” said Brian Austin. He’s on the executive board of the Madison Professional Police Officers Association. “These are very fundamental rights to our nation.”

Capitol Police Chief Erwin agrees – but in a statement, said it’s not about saying what you want when you want – it’s about sharing the space at the Capitol and there is a process for that. Austin also doesn’t want to see the rapport that’s developed between the Capitol police and the protesters break down. “Things could turn ugly and I would just hate to see that happen,” he said.

And Austin noted that Capitol Police officers are in a tough spot – unlike most other police officers around the state, they were not exempt from Act 10, and so have lost most collective bargaining rights.