You are here: Home / News / Baldwin says Democrats need to fight back (AUDIO) 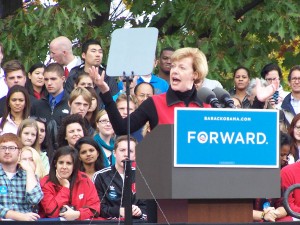 Wisconsin Congresswoman Tammy Baldwin helped President Obama rally supporters in Madison Thursday, calling on them to fight back in the final days before the November election. The Democratic U.S. Senate nominee asked the crowd to carry on the Wisconsin tradition of electing progressive candidates to represent the state in Washington.

Baldwin accused Republican opponent Tommy Thompson of being very similar to GOP presidential nominee Mitt Romney, with both former governors trying to remake themselves after the primary and in recent debates. After Wednesday’s first presidential debate, she says the American people are seeing a clear contrast of where the two candidates will take the country in the next four years.

The Madison Democrat says Republicans want to pass tax cuts for those at the top, busting the budget for those in the middle class. She says those politics of the past only hold us back, and what the country needs to move forward now is a strong middle class.

Baldwin asked voters to help her defeat former Governor Tommy Thompson in the U.S. Senate race this November and to elect her as a progressive voice for Wisconsin.

The Thompson campaign responded to Baldwin’s presence at the rally in Madison saying it was fitting that the “Madison liberal” would join the “spender in chief on the stage.” A spokeswoman for the campaign says “while President Obama has a lot to explain to the Wisconsin families he has hammered with his tax-and-spend agenda, Baldwin has even more.”