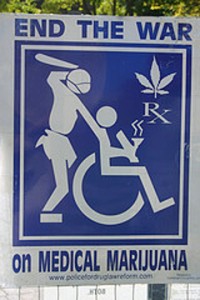 What may be the nation’s longest-running cannabis festival is underway in Madison. It’s the 42nd Annual Great Midwest Marijuana Harvest Festival, and event organizer Ruth Reifeis said the festival is really about a simple message. “Classifying a plant as a Schedule 1 narcotic. and completely ignoring the positive uses of it in agriculture, in industry, in medical use, and as recreation, is a huge waste of money and resources,” she said.

Reifeis is a cancer survivor who credits medical marijuana with making it possible for her to get through her treatment regimen. “Medical marijuana is a major issue for patients and for caregivers who’ve seen people suffer going through chemo . . . when cannabis can, if not cure, then alleviate to a degree that no other medicine can,” she said. “We do not have an active medical marijuana bill right now.” Organizers hope to eventually have a statewide ballot initiative on decriminalization or outright legalization of cannabis.

There could also be financial benefits to legalization: Reifeis noted that Wisconsin was the second largest grower of industrial hemp, prior the plant’s cultivation being outlawed. The festival runs through this weekend in Madison, with live music, vendors and speakers.