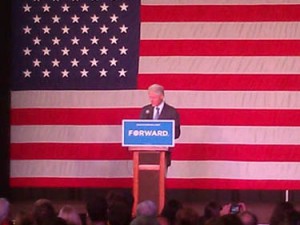 Former President Bill Clinton laid out a series of reasons to reelect President Obama, during a campaign stop Friday night on the UW-Green Bay campus. Speaking for nearly an hour at the Kress Events Center, Clinton crunched numbers on job growth, health care, and student loans. He says the economy was in horrible shape when President Obama took office. And, while some might not feel like things are turning around, they are.

Clinton says a provision in the health care reform law that requires companies to spend 80-percent of health care premiums on care is having a positive impact. He says 282,000 people in Wisconsin received $10.4 million in refunds because of it, which is a much better situation than in 2009. The former president also praised provisions that allow young people to stay on their parents’ health insurance until they turn 26.

He also pointed to President Obama’s post-recession record on job growth as another reason to give the Democrat another term in office. Clinton says that record is better than former President George W. Bush’s and shows investing in the middle class and giving poor people and honorable way to improve their situation “works better than trickle down” policies argued for by Republicans.

Clinton is just the latest in a long list of political heavyweights who have been in Wisconsin in just the past few days campaigning for Obama and Democratic US Senate nominee Tammy Baldwin. First Lady Michelle Obama also attended rallies in the Badger State Friday in Racine and Wausau. Republican Presidential nominee Mitt Romney and GOP US Senate candidate Tommy Thompson have also had New Jersey Governor Chris Christie and Arizona Senator John McCain, along with RNC Chairman Reince Priebus, make appearances across the state pushing for support in the November 6th election.