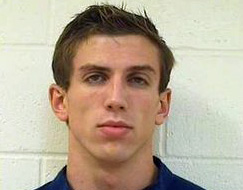 Eau Claire Police have released details of a crime spree, which ended with the suspect shot and killed by police last Friday. It began at 6:30 Friday night with a hit and run on Highland Avenue. Police then began pursuing 24 year-old Christian Peterson of Wausau.

At 6:42, Peterson was involved in another hit and run at Jefferson and Farwell streets, which resulted in injuries to the other motorist. Peterson fled on foot.

At 6:47, police say Peterson confronted a resident at the 400 block of Roosevelt Avenue with a gun, and fled with the resident’s black SUV. Eau Claire police began pursuing Peterson from the Water Street area to Clairemont Avenue, and all the way to Wagner’s Lanes parking lot, where police rammed and disabled the SUV.

Peterson fled on foot to Culver’s on Brackett Avenue, where he flashed his gun and attempted to steal an occupied truck at the drive-thru window. Police say Peterson turned his attention in the direction of K-9 officer Jason Ruppert, who was ordering him to drop the gun. Peterson was then shot by the officer and eventually died from his injuries.

Peterson was wanted by Marathon County authorities for escape. Judge Vincent Howard issued an arrest warrant for him on October 2nd. Peterson had a long history of past criminal charges including making and trafficking methamphetamines, burglary, and resisting arrest.

The chain of events is still under investigation by multiple agencies.