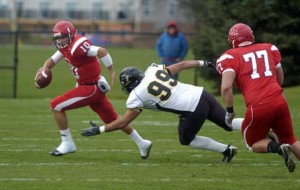 When Drew Vanderlin attended the Green Bay Packers vs the Dallas Cowboys game on November 23, 1997, little did he know he would have an opportunity to play on the same field almost 15 years later.

Vanderlin, a rookie defensive end and alumni of Green Bay Southwest high school, was signed to the Packers practice squad Wednesday after participating in a rookie tryout camp the team held in May.

The rookie describes the signing to be “a dream come true” and is excited to have the opportunity.

While Vanderlin has the opportunity to fulfill a long-time dream of playing for the Packers, he realizes the need to make an impact and stake his claim to remain on the team.

AUDIO: Vanderlin will try to make “a long run” with team :14

Between the rookie tryout camp and now, Vanderlin spent his time as the strength and defensive line coach at UW-Stevens Point.  He said it helped because he could work out, keep in shape, and coach, which he eventually wants to get into.

AUDIO: Vanderlin on coaching at UW-SP :17

The defensive end impressed in college while at Michigan Tech, ranking second on their all-time sacks list with 20.  He was also named the team’s defensive player of the year after his junior and senior seasons.

Vanderlin has a long way to go, but the first step is taking advantage of his opportunities on the practice squad.