You are here: Home / Packers / Greg Jennings hopes to return against the Texans 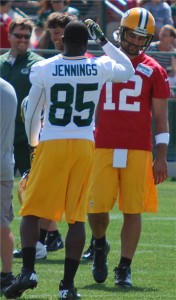 While Green Bay Packers‘ wide receiver Greg Jennings still struggles with a groin injury from week one, he says he is making progress and there’s a chance for him to play this Sunday.

AUDIO: Jennings says there is a chance he may play :12

Jennings is playing things cautiously when it comes to the groin injury.  He is trying not to rush back as quickly as he did in week three to try to prevent another setback.

Even if Jennings does not play Sunday night against the Houston Texans, he believes it will not affect how the Texans’ defense will prepare for the Packers’ passing attack.

If Jennings is able to play, quarterback Aaron Rodgers will certainly be happy to have him back as an offensive weapon.  This season, Rodgers has averaged a higher passer rating with Jennings (98.23) than without him (94.15).

Greg Jennings looks to return and provide an offensive spark as the Packers take on the undefeated Houston Texans Sunday night.