You are here: Home / Packers / Hayward adds to interception totals 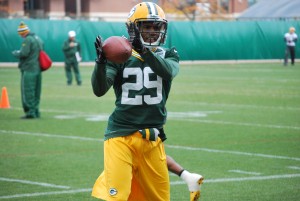 AUDIO: Hayward on his interception :14

The fourth pick came in his first NFL start.  Hayward got the call in place of injured corner Sam Shields.  Hayward stayed at corner in the base and nickel packages.  He moved inside in the dime when the Packers gave snaps to Davon House on the outside.  House made his 2012 debut after missing the first six games because of a shoulder injury.

Hayward was one of four players Sunday, filling in for injured defensive starters.

AUDIO: Charles Woodson likes what he see’s from Hayward :09