You are here: Home / Badgers / Hockey Badgers on the tube

Fox Sports Wisconsin and its alternate channel, along with the Big Ten 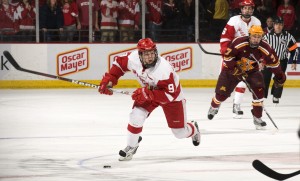 It total, all but three of UW’s 19 regular-season home games will air live on television.

Six Badger road games, in addition to the Hockey City Classic at Soldier Field in Chicago, will also air live.

The Badgers will open exhibition play on Saturday night at 8pm against the U.S. Under-18 team at the Kohl Center.