You are here: Home / Packers / Holmgren is out in Cleveland 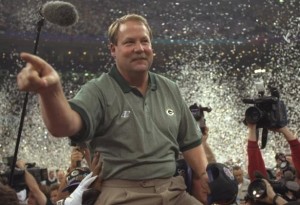 Jimmy Haslam was introduced as the Browns’ new boss after NFL owners unanimously approved his $1-billion purchase from Randy Lerner.

Haslam said he plans no other personnel changes before the 2013 season.

Holmgren is expected to stay on for the rest of the season to help with the transition.  He led the Packers to the 1996 NFL championship and lost in the Super Bowl the next season to Denver.

Since Holmgren arrived in Cleveland, the Browns have gone 10-28.  They won for the first time this season, last Sunday against Cincinnati.