You are here: Home / Sports / Loggers named 2012 NWL Organization of the Year 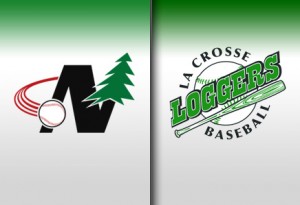 The La Crosse Loggers celebrated their 10-year anniversary season by capturing their first ever NWL Title, they also welcomed in their 1,000,000th fan through the Copeland Park turnstiles on July 28 and drew over 100,000 fans for the 8th consecutive season.  The Loggers are one of only two summer collegiate teams in American to achieve that feat and their season attendance total of 108,242 ranks second nationally, trailing only their NWL friends to the east, the Madison Mallards.

On the field, the Loggers finished 53-21, the second best record in NWL history and the 2012 squad broke six team offensive records and either broke or tied four more individual Logger records.

It’s the second time in nine years that Goodell has received the Executive of the Year award, having also captured it in 2004.  Goodell has been the only general manager the Loggers have known in their ten years of existence.