You are here: Home / News / Madison readies for Freakfest and Homecoming 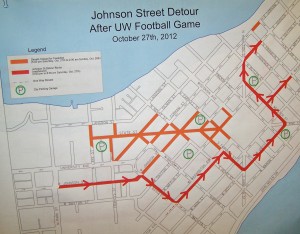 It’s going to be an exciting – and crowded – Saturday in Madison. If you’re headed to Madison for Badger Homecoming, you’ll need to know that the game will end after a number of downtown streets will be blocked off, in order to accommodate the city’s annual Freakfest Halloween celebration. Tom Moore with Madison Traffic and Engineering was the first to realize that would mean the potential for some serious traffic snarls. His solution is a detour which will route traffic away from Johnson Street, which normally would funnel a lot of traffic away from Camp Randall stadium, where the Badgers will be hosting the Michigan State Spartans. There will be police officers at key intersections, and special signal timing to keep traffic flowing as smoothly as possible.

“We encourage people to be patient when they’re driving, if they can stay on that detour,” said Madison Police Lieutenant Dave McCaw. “By taking ‘shortcuts’ they’ll probably just slow themselves down more.” 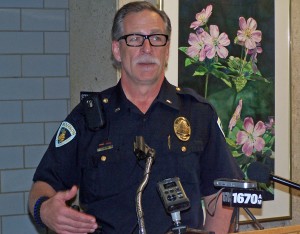 McCaw said doesn’t expect many drunken Badger fans trying to try to keep their buzz going on State Street after the game. Freakfest is now in its sixth year as a paid admission event, and that has substantially curtailed the alcohol-releated problems which gave the event – and Madison – a black eye in the national media. “They really can’t show up on State Street and get more drunk,” said McCaw. “It’s not the State Street of old, where they can walk up and down the street and continue to consume.”

Charlie Goldstone is with Frank Brothers Productions, now in its sixth year of managing Freakfest. He says it’s difficult to say exactly how many paid attendees will be there, but ticket sales are capped at 45,000.