You are here: Home / Packers / Packers cave in second half, fall to Colts 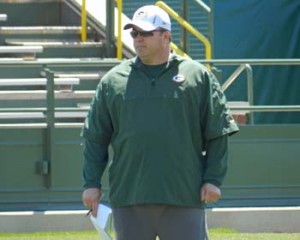 halftime, but how else would you explain what happened in Sunday’s 30-27 Colts victory at Lucas Oil Stadium?

The Packers suffered their fourth-largest blown lead in franchise history.  They had a chance to put the Colts away and didn’t.  Then, with a chance to tie late, Mason Crosby missed a 51-yard field goal badly, pushing the Colts to 2-2 and dropping the Packers to 2-3.

The Packers started the second half with 7-straight pass plays.  The result, interception on the first drive.  That was followed by a punt, a missed field goal and another punt, which allowed the Colts to get back in the game.

I heard players suggest the Colts win didn’t have anything to do with the fact that their head coach, Chuck Pagano wasn’t there because he’s undergoing treatment for a form of Leukemia.  That suggestion is utterly nonsense.

When the Packers opened the door for the Colts to get back in the game, the Colts used every ounce of motivation to help them push through for the win.  That includes Chuck Pagano, who e-mailed a message to his team before the game.

Even Aaron Rodgers hasn’t totally been on his game either.  Sure, Rodgers numbers are respectable on paper.  But he had a chance to hit Jordy Nelson down the right sideline and missed him badly for what would have been a touchdown.

Defensively, the Packers smothered Andrew Luck in the first half, but they let him up for air in the second half and saw Luck drive 80-yards in the end to tally the go-ahead touchdown.

The Packers game plan appeared to have changed when they lost running back Cedric Benson.  Mike McCarthy didn’t show the same confidence in backup Alex Green as he did with starter Cedric Benson.  The result was little to no balance offensively, and a Colt defense that pinned their ears back and put a heavy pass rush on Aaron Rodgers in the second half.

The puzzling thing about the Packers 2-3 start is they’re playing on offense with most of the same players they had a year ago.  Yet they aren’t playing any where close to the capacity of a year ago.

The Packers have been down before though.  They struggled in their most recent Super Bowl year, needing help to get in, having to win all three playoff games on the road and then capping it off with a Super Bowl victory.  That year, the Packers got hot at the right time and turned it into a championship.

That kind of turn-around could happen again, especially with the league’s reigning MVP at the helm.  But the Packers need to be more consistent, they need receivers to stop dropping passes and defensive backs to stop dropping interceptions.  Pre-snap penalties have to be eliminated and the Packers will have to figure a way to win on the road.  They were 7-1 on the road last year, but they’re off to an 0-2 start this season.

It starts in Houston, this coming Sunday against the Texans.