You are here: Home / Packers / Packers hoping Benson can return 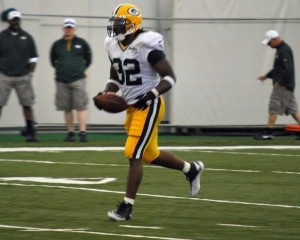 on Wednesday, but designated to return.

Benson sprained his left foot in Sunday’s 30-27 loss to the Indianapolis Colts.  He must sit out eight games before he can return.  He’ll be eligible to practice after six weeks.  Packers coach Mike McCarthy is optimistic about Benson’s ability to make it back.

Benson has handled most of the workload for the Packers so far this season.  Now it’ll be Alex Green that steps in to start on Sunday night, with help from James Starks and Brandon Saine.