You are here: Home / News / Proposal would redistribute road spending 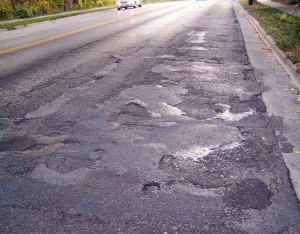 A Wisconsin environmental policy group has a proposal to amend the state’s constitution, in order to address a transportation funding formula which often leaves local governments struggling to maintain streets and roads.

They’re proposing this as an amendment to the state constitution because, Hiniker said , local governments can’t get their needs met when competing with the state’s road builders. “Every year, the legislature ignores the requests from local units of government to get more in local road aids, and every year more money goes to highway expansion/”

It’s a tough road – constitutional amendments must pass two consecutive sessions of the legislature, and a statewide referendum. “People sometimes are critical, saying “well that’s impossible.” It’s not impossible to pass a constitutional amendment. It may not happen this year, it may not happen next year. We will get this passed, unless the legislature passes a law that gives more money to keep communities whole on their road costs.”