You are here: Home / News / Rain does little to ease Wisconsin drought 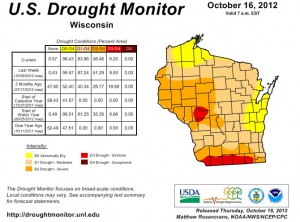 Despite heavy rain last weekend in many parts of the state, Wisconsin’s drought conditions persist. The US Drought Monitor said Thursday that almost 84 percent of the state’s land area is still in a moderate-to-extreme drought, only down slightly from 87.5 percent last week.

The northern part of Door County is still the only place in Wisconsin that’s not abnormally dry or worse, but the places with extreme drought conditions shrunk a bit. An extremely dry patch in west central Wisconsin was reduced and now only covers most of Jackson County, plus small parts of Clark and Monroe counties.

The extreme drought territory in far southern Wisconsin also got smaller. It pretty much incudes all of Walworth, Rock, Green, and Lafayette counties, along with a third of Grant County. Waushara County is still in a moderate drought, even though up to six inches of rain fell there last weekend.

The biggest improvement was in east central Wisconsin, where a number of places lost their moderate drought status and are now abnormally dry.

Nationally, just over 62-percent of the 48 mainland states were in some form of drought; down more than a percentage point from last week.

Rain was in the forecast throughout Wisconsin today, but it was only falling in a few scattered areas late this morning. Dry weather is expected for the weekend, with the next chance of rain coming on Monday.