You are here: Home / Packers / Rodgers is NFC Player of the Week 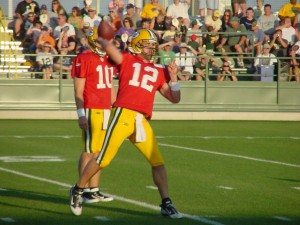 for 319 yards and four touchdowns in the 28-27 win over the New Orleans Saints.  For that effort, Rogers has been named the NFC’s Offensive Player of the Week.

Rodgers led a Packers’ offense that amassed a season-high 421 yards and 30 first downs, the most in a game by Green Bay since November 12, 1989.

This is Rodgers sixth career Player of the Week Award.  He was honored twice in 2010 and three times last year.