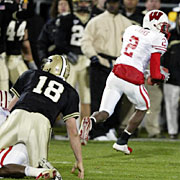 On October 16, 2004 no. 10 ranked Wisconsin went up against no. 5 ranked Purdue at Ross Ade Stadium. The Badgers were trailing the Boilermakers by three points with less than three minutes to play. That’s when Badgers cornerback Scott Starks made a move that would be considered one of the best that year. Purdue quarterback Kyle Orton made a play for a first down but was hit low by Starks and high by safety Robert Brooks to fumble the ball.  Starks picked it up and returned 40 yards for a touchdown.  The Badgers would run out the clock and claim a seventh straight victory beating Purdue 20 to 17.

WRN Sports Director Bill Scott spoke with Starks about the play. When asked if his intention was to strip the ball, Starks says he wasn’t in a position to strip. That’s when he decided to hit Orton as hard as he could and hope the ball popped out, which it did. In response to the game looking like it was going to be a Wisconsin loss, Starks says, “Never lose hope and always think you have a chance.”

Starks was drafted by the Jacksonville Jaguars in 2005 where he played through 2010. He is currently a free agent.