You are here: Home / Sports / Shining Moments: The Legacy of Badger Bob 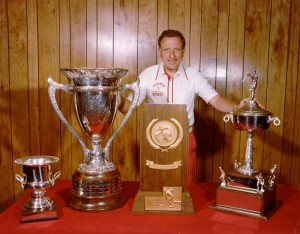 This Friday, November 2, the Badgers Hockey team will open their home season by officially dedicating the Kohl Center’s ice as “Bob Johnson Rink.”  Bob Johnson is known to many simply as “Badger Bob.”  His legacy in Wisconsin began in 1966 when he became head coach of the men’s ice hockey team. During his career with the Badgers, Johnson led the team to seven national championship appearances and three winning titles, in 1973, 1977, and 1981.  During his time with the Badgers, Johnson coached the U.S. national hockey team at the 1976 Winter Olympics.  He moved on to the NHL in 1982 accepting the head coach position with the Calgary Flames.  Under Johnson’s leadership the Flames made it to the Stanley Cup finals in 1986.  After a few years as executive director of USA Hockey, Johnson was asked to coach the Pittsburgh Penguins in 1990. The team won the 1991 Stanley Cup. Johnson was diagnosed with cancer the following August and on November 26, 1991 lost his battle.  The Penguins went on to win the Stanley Cup again in 1992 and dedicated their victory to Johnson’s memory.

Not only remembered for being able to lead a team to victory, Johnson’s reputation was as a man who always looked at the positive. WRN Sports Director Bill Scott spoke with Johnson’s son Mark Johnson, who coaches Badger women’s ice hockey.  Mark Johnson remembers his father as a motivator.  “He was always positive, you know and always trying to bring the best out in people. He always tried to improve them whether it was on and off the ice. And I think if you’re genuine to those certan things when you’re dealing with young hockey players or young people, you know it can be infectious. And he infected a lot of people. And when people realize that he did this on a daily basis, it wasn’t phony; he wasn’t trying to be an actor; that’s who he was. I think people really embraced it,” said Johson.