You are here: Home / Sports / Shining Moments: The Storied Rivalry with Minnesota 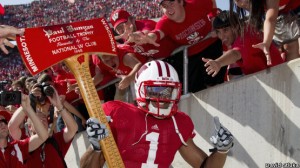 When Wisconsin welcomes Minnesota to Camp Randall Saturday, the Badgers will be focused on winning Paul Bunyan’s Axe for a ninth straight year. The trophy is a symbol of the rivalry between the Badgers and the Gophers that stretches back to November 15, 1890. The two teams have met every year, but one, since that day, making it the most-played rivalry in Division I-A football. The axe, named after a giant lumberjack from folklore, has been part of the tradition since 1948. It was created by the University of Wisconsin’s National W Club.  The axe’s six-foot long handle features the scores from each game. The current axe replaced the original in 2000 after it was worn-out and didn’t have much room left for scores. The original axe was entered into the College Football Hall of Fame in 2003.

WRN Sports Director Bill Scott spoke to former Badger running back Anthony Davis about the motivation that comes along with the tradition. “Any time it’s a rivalry game, you never want to see the other team run across the field and grab the trophy from your sideline and celebrate, and especially on your home turf,” said Davis.

The schools alternate hosting duties every year, but whichever team wins keeps the axe on their campus until the next matchup.  Fans enjoy getting their photos taken with the axe. It’s also been used to pump up fan reactions at other UW sporting events.