You are here: Home / Packers / Starks to be a game-time decision 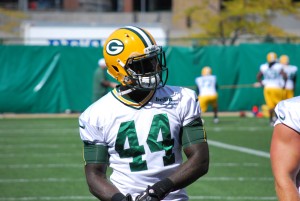 To say this season has been frustrating for Green Bay Packers running back James Starks would be an understatement.

Starks, who went down with turf toe during the opening preseason game, will be a game-time decision for Sunday’s game in Indianapolis and is anxious to get back to playing.

AUDIO: Starks is anxious to get back :23

Turf toe, according to WebMD.com, is a sprain to specific ligaments that surround the big toe joint.  These ligaments allow the big toe to flex up and down as well as help absorb the weight that pushes on the ball of the foot when walking or running.

The injury most commonly occurs when playing on artificial surfaces and takes three or more weeks for the pain associated to cease.

Starks says he has never dealt with a toe injury this serious before.

AUDIO: Starks never thought it would be this serious :17

While he admits that no one in the NFL ever plays at 100%, he says he feels ready to play Sunday.

Starks looks to make his return and help reinforce the Packers’ run game this Sunday when the they square off with the Indianapolis Colts.