You are here: Home / News / UW Madison prepares for Obama 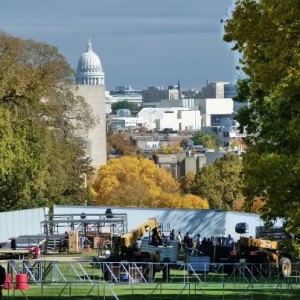 Crews were hard at work Wednesday, preparing for President Barack Obama’s second visit to Wisconsin in less than a month. Technicians spent the crisp fall afternoon setting up a stage and seating area on the campus’ Bascom Hill, where a crowd of thousands is expected Thursday afternoon.

Obama was last in Madison in 2010, where he spoke to a crowd of tens of thousands of people at the University’s Library Mall. During that visit, he urged voters to get out and support Democratic Senator Russ Feingold’s reelection bid and Milwaukee Mayor Tom Barrett in his run for governor.

UW-Madison political scientist David Canon says the president can expect to see a lot of friendly faces when he visits campus. He says events such as this are a great way to energize the Democratic base.

As part of security precautions for the president’s visit, several buildings near the site of the event have been closed for the day and parking restrictions have been put in place across the campus. Gates for the event open at noon, although President Obama is not expected to speak until much later in the afternoon.