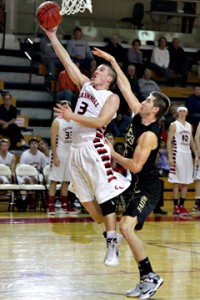 The 5’10, 170-pound sophomore was coming off a poor shooting weekend, but his coach told him to keep shooting.  Taylor did just that, launching 108 shots in 36 minutes of playing time.  He hit 27 of 71 three-point attempts and 52 of 108 shots overall.  Throw in 7 free throws on 10 attempts and that rounds out the 138 point night for Taylor.

The previous scoring record belonged to Bevo Francis of Rio Grande.  He scored 113 points against Hillsdale in 1954.

Taylor started his collegiate career at UW-La Crosse.  After one season there, Taylor transferred to Grinnell.

Taylor had 58 points at halftime, then hit 32 of his next 58 shots in the second half.