You are here: Home / Packers / Despite struggles, Packers offense pulls out a win 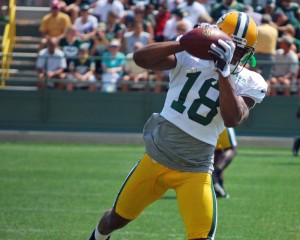 four had something to do with it.

Thanks to the defense, the Packers were in the game to the end and the light went on when the Packers quickly moved the ball down field on their final drive.  Jermichael Finley caught a pass, broke a tackle and moved down the right sideline for 40-yards.

The game winner came when Rodgers found Randall Cobb for a tumbling catch in the end zone.

The Packers had their issues for much of the game, but Mike McCarthy said his team kept battling.

AUDIO: Mike McCarthy said his team didn’t give up :19

The Packers won their 5th straight game, improving to 7-3.  They trail the Chicago Bears by just 1/2 game going into tonight’s Bears vs. 49ers game.