You are here: Home / Packers / Dietrich-Smith versatile in offensive roles 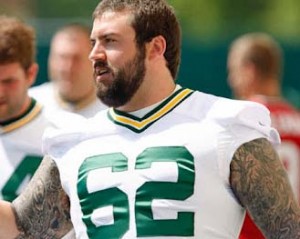 Green Bay Packers offensive lineman Evan Dietrich-Smith has played a variety of positions during his time with the green and gold.

He is listed by the Packer’s website as a center/guard, but he can now add tight-end to his profile.

Dietrich-Smith, normally a backup offensive lineman, was brought into a few special packages as a tight-end in the Packer’s win over Jacksonville.

The plays he got on the field as an extra tight-end proved to be very successful from an individual and team standpoint.  He says he is excited to get the extra chances and is looking for more.

This season has been different from last season for Dietrich-Smith.  Last season he played in 16 games and started three of them because of injuries to other starters.  While he has had limited snaps this season, he says it is fun to get on the field.

In the game against Jacksonville, Jaguars’ tackle Guy Whimper caught a touchdown pass while in a similar role to the one Dietrich-Smith played.  When asked when it will be his turn to catch a touchdown pass, he told the media to wait and see.

The Packers look to get their fourth consecutive win as they take on the Arizona Cardinals at Lambeau Field this Sunday.