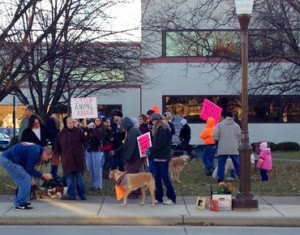 About 100 people brought their pets to the courthouse in Wausau Wednesday – the same day a woman appeared in court for the torture and death of her boyfriend’s dog. The case against 20 year-old Sean Janas of Wausau has attracted international publicity. Prosecutors said she wrote in a diary about enjoying how four year-old Mary – a German shepherd and Labrador mix – was suffering. Officials said Janas poisoned Mary to death in June.

Janas was ordered to stand trial after she waived her right to a preliminary hearing in Marathon County Circuit Court. She’s expected to enter pleas November 12th to charges of animal mistreatment, poisoning an animal, and obstructing police.

Thursday’s pet demonstration was called the “March for Mary.” Stacy Cole of Wausau radio station WIFC has been making people aware of the dog’s plight – and she said people from around the world are asking that the defendant be fully punished. And they’re also asking for tougher anti-cruelty laws. Almost 50,000 people have signed on-line petitions in support of the dog that was killed. Prosecutor Lamont Jacobson said he has received thousands of e-mails saying the same thing.