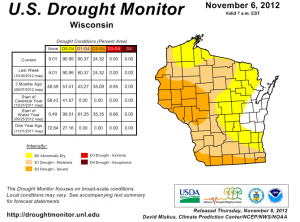 Drought conditions in Wisconsin did not change over the last week. The US Drought Monitor said today almost 91 percent of the state’s land area remains abnormally dry or worse. The only place that’s not in a drought is in eastern Wisconsin, bounded roughly by Marinette to the north, Ripon to the west, Oostburg to the south, and the Lake Michigan shoreline on the east.

Almost a quarter of the state’s land area remains in a severe drought, generally in west central Wisconsin and the far south.

It’s been dry all year in parts of the Badger State. Just over 58 percent of the state’s land area was in a drought back in January.

Nationally, about 60 percent of the land in the lower 48 states was in some kind of drought as of Tuesday. That’s down by less than one percent from a week ago.

Parts of Wisconsin had light snow earlier in the week, but it’s long gone. The far north had light rain this morning, but dry weather is now being predicted into Saturday. Highs will be in the 40s and 50s for the next couple of days, although it is supposed to warm up to the 60s in southwest Wisconsin for the weekend.