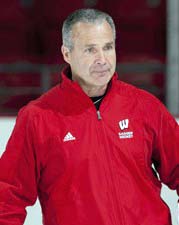 Mike Eaves is using that time to search for a new assistant coach.

Butters, who played at Minnesota, also served as an assistant coach with the Golden Gophers before joining Hockey Ministries, an organization that serves and supports the spiritual needs of players, coaches, families and friends.

Wisconsin is off to a 1-4-1 start this season and in the process lost highly touted freshman Nic Kerdiles to a ten game suspension for alleged violations of the NCAA amateurism code.  In addition, leading scorer Mark Zengerle broke his left index finger last weekend and will be sidelined at least a month.

AUDIO: Butters said the timing isn’t great, but he had to go :19