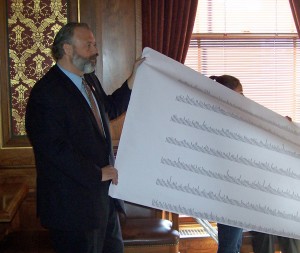 Wisconsin Republicans are being urged to abandon a proposal that would end same day voter registration at polling places in the state.

Governor Scott Walker and GOP lawmakers have expressed support for ending the practice of allowing voters to register at the polls on Election Day. One Wisconsin Now Executive Director Scot Ross says the option needs to remain though, since it provides a valuable service. Ross notes that over two million people took advantage of the option in the 2004 and 2008 presidential elections.

Supporters of ending same day registration say the move would help lessen the burden on local clerks and prevent voter fraud. Ross says there’s no evidence to show the system slows down the voting process or that it’s being abused. He says the “only fraud is partisans manipulating the process to achieve political goals.”

Ross says ending the practice is just an attempt by Republicans to prevent certain people from casting a ballot and it would only disenfranchise voters. The liberal advocacy group has been highly critical of Republicans in recent weeks who have claimed voter fraud is rampant in the state, arguing that those lawmakers have been unable to produce any evidence to back up their claims.

One Wisconsin Now and several other groups delivered a petition with over 15,000 signatures to the governor’s office Thursday, urging him to reject any attempt to end same day registration in Wisconsin.