You are here: Home / Crime / Courts / Missing Mazomanie man was tortured then murdered 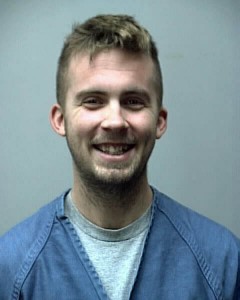 The Dane County Sheriff’s office released this 2008 booking of Jeffrey Vogelsberg, who is currently being held in Pierce County, WA.

The body of 27-year-old Matthew Graville was discovered Monday, buried on state land near Lone Rock. Authorities say it was put there by 27-year-old Jeffrey Vogelsberg, a stepbrother that Graville looked up to and shared a home with in Mazomanie.

Dane County Sheriff Dave Mahoney has a hard time keeping his emotions in check Tuesday while announcing Graville’s death. With his voice cracking, Mahoney said in his 33 years of police work “he finds it very difficult to find another case where an individual took advantage and abused a developmentally disabled male for his own entertainment.”

Mahoney says Matthew, who had Asperger’s Syndrome, endured “a living hell” and “could only find peace in death.”

Vogelsberg was arrested in Fort McCord military base in Lewis, WA and is currently being held on charges of first degree murder and hiding a corpse.

No details have been given on the cause of Graville’s death or the torture involved. Police say Matthew was killed on July first, put in a freezer for a few days, and then buried.

Graville’s stepmother, 49-year-old Laura Robar of Fort Atkinson, faces charges for forging documents to get his food stamps. 28-year-old Robert McCumber, the owner of the home the two men lived in, also faces charging for helping bury the body.

Police say the murder was uncovered after officers went to interview Robar about abusing Graville’s disability benefits. That interview and another with McCumber helped lead police to the location of Graville’s body in Sauk County.