You are here: Home / News / Obama stumps in Green Bay 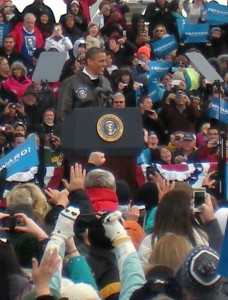 A large shivering crowd greets President Barack Obama at the Austin Straubel International airport this morning for his first campaign stop since Hurricane Sandy slammed into the East Coast.

Obama calls the super-storm one of the worst in our lifetimes. He says when disaster strikes, “We see America at its best.” He continues, “All the petty differences that consume us in normal times all seem to melt away. There are no Democrats or Republicans during a storm; there are just fellow Americans.” The president pledges to help those whose lives have been turned upside down.

Obama tells the crowd of supporters on the airport tarmac that the country has come a long way in the past four years. “Our businesses have created over 5 million new jobs; the American auto industry is back on top; American manufacturing is growing at the fastest pace in 15 years; we are less dependent on foreign oil than in any time in 20 years.”

AUDIO: Obama says the nation faces a lot of challenges, and creating new jobs is one of them. :22

Obama also slams Republican presidential candidate Mitt Romney, claiming that he would bring back policies that hurt the nation’s economy.

Green Bay Packers safety Charles Woodson tells the crowd before the president arrives he’s thankful to be a part of a community like Green Bay. The crowd cheers as football player says he wants to give back to help people in other communities that are cleaning up from Hurricane Sandy. “Today I wanna donate $100,000 to the American Red Cross.”

Woodson also praised Obama for setting politics aside to help with storm relief. He noted that Obama teamed up with Republican New Jersey Governor Chris Christie to tour affected areas.

Obama was greeted warmly a cold day in northeast Wisconsin. The Chicagoan thanks everyone in Packerland for giving “such a warm welcome to a Bears fan.”

Republican presidential candidate Mitt Romney will be in West Allis at State Park Park Friday morning, and his running mate Paul Ryan made three campaign stops in the Badger State this week. Governor Walker appeared in Green Bay shortly after Obama did.