You are here: Home / Packers / Packers have little confidence in their kicker at the moment

Faced with a 4th and 4 at the Detroit 31-yard line, the Packers could have 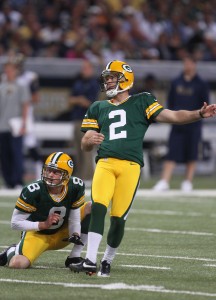 lined up Mason Crosby for a 48-yard field goal try.  Aaron Rodgers was headed off the field when Mike McCarthy called a play instead of opting for the 3-point try.  Rodgers pass fell incomplete and the Lions took over.

Crosby is trying to convince himself that the Packers sometimes go for it on fourth down, which they do.  But had Mike McCarthy had any confidence in his kicker, he would have went for the points on the road.

Crosby finally got his chance, late in the first half, from 50 yards.  He missed just right, but Lions coach Jim Schwartz had called time out.  With another chance, Crosby then pulled the next one to the left.

Then, Crosby had another chance to make up for the miss at the end of the half when he lined up from 38 yards with a chance to tie the game.  He pulled that one left as well.

Crosby certainly isn’t out of his slump, but he did make his final kick, hitting from 39-yards with 24 seconds left, giving the Packers a 4-point lead in the
24-20 victory.

Crosby has now missed 7-field goals this season (11 of 18).  He missed two in the loss to the Colts, the only time that a Crosby miss has helped contribute to a loss.  He’s missed several more kicks, but those have not cost the Packers a victory.  If that were the case, the story on Crosby’s employment future in Green Bay might be different.

His 61.1% field-goal success rate ranks second to last in the NFL.  The Packers say he’s safe for now, but if the slump continues, his security may not.  The Packers do have a little time, but with cold weather coming, it might be a good idea for Crosby to figure things out before it’s too late.