You are here: Home / Packers / Packers offensive line with brutal performance in loss

In one respect, the Green Bay Packers are probably feeling a bit lucky 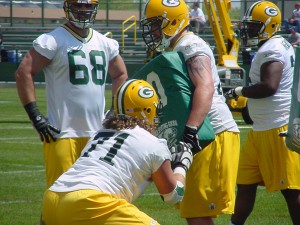 this morning.  They are lucky that they still have a starting quarterback available to them for this Sunday’s game against the Minnesota Vikings at Lambeau Field.

The Packers offensive line played perhaps its worst game in recent memory as the Packers 5-game win streak came to an end with a 38-10 loss to the New York Giants.  Aaron Rodgers was sacked 5-times.  He was hit 7-times and forced to scramble for his life several more times.

It got to the point where Mike McCarthy feared for his quarterback.

AUDIO: Mike McCarthy was worried about hits on Aaron Rodgers :14

The Giants defense physically abused the Packers offensive line.  Defensive backs didn’t even have to cover very long.  The Giants pass rushers were on Rodgers so quick that he maybe had a chance to look at his first option or two before taking his eyes off the downfield receivers and opting to scramble.

It all led to the Packers, suffering their worst defeat under Mike McCarthy since December of 2007 against the Chicago Bears.

Rodgers completed 15 of 27 for 230 yards, 1 touchdown and 1 interception.  The Giants pass rush was on Rodgers faster than at any time in recent memory.  It was total dominance.

The offensive line wasn’t the only area of concern.  There’s plenty more blame to go around.

The Packers came in with the 11th ranked run defense, yet couldn’t stop the Giants.  Their secondary looked dis-interested in tackling anyone yesterday.  And the pass rush was MIA.  Eli Manning had little to worry about.  He stood tall in the pocket and had all night to throw the football.

The Packers will make their corrections and put this one behind them.  They’re embarrassed and will likely take their frustrations out on the Minnesota Vikings this Sunday.  But the looming question is can the Packers beat the top physical teams in the NFC?  Games against San Francisco and the Giants last night would indicate that it’ll be very difficult!