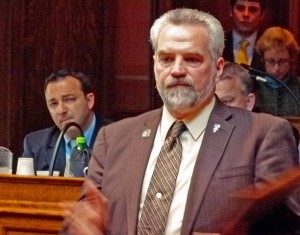 After welcoming new members to the Assembly GOP caucus, those who lost reelection say farewell to their colleagues, that includes Rice Lake Republican Roger Rivard.

Rivard’s controversial comments on rape have cost him political support — financial and otherwise — and ultimately his job. Rivard chokes up as he tells fellow Republicans that it was a great pleasure to serve with them, many of whom, he says, became his good friends who’ll remain that way forever.

“One thing about serving with you … and even the last three weeks have been pretty rough, especially on my wife.” Rivard attempts to keep his emotions in check. “And uh, a lot of you people called and texted me and phoned me and emailed me. You’re true friends and I can’t tell you how much I appreciate that. I really can’t.” 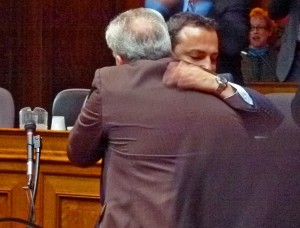 It’s been very rough, he says, especially the last few weeks. Then-Republican vice presidential candidate Paul Ryan and Governor Scott Walker were among those who had publicly withdrawn their endorsements of Rivard’s reelection campaign.

Rivard says he’ll survive. “What I’ve got looking forward to me and my future is only good; it’s only up. It can’t get any worse than it is right now.”

Majority Leader Scott Suder (R-Abbotsford) sings Rivard’s praises in front of the caucus as he says goodbye to his fellow lawmaker and “dear, dear friend.” Suder says, “I am very, very proud to not only call you a colleague, but our friend. You are always welcome in this caucus.”

Republican lawmakers applaud Rivard as he says he’ll continue to fight to do what’s right. Rivard was first elected to the Assembly in 2010. He lost his reelection bid on November 6th to Rice Lake Democrat Stephen Smith.