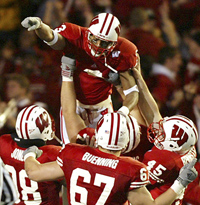 Defending national champions, Ohio State was on a 19-game winning streak when they met the Badgers at Camp Randall on October 11, 2003.  No. 23 Wisconsin came into the game with a 5 and 1 record against the no. 3 ranked Buckeyes. The game started with no scoring in the first quarter. The Badgers put numbers on the board on the first play of the second quarter with a two yard touchdown run by fill-in running back Booker Stanley. He was covering for Anthony Davis, who was out with an ankle injury.  The Badgers led 7 to 3 at half time after Ohio State hit a field goal. In the third quarter, one of the game’s most talked about moments happened. Badger quarterback Jim Sorgi was pulled from the game after being tackled by linebackers AJ Hawk and Robert Reynolds, who applied a choke hold on Sorgi, causing him breathing problems and making him unable to call plays.  Reynolds was suspended for the next game. Quarterback Matt Schabert took over for Sorgi.  The Buckeyes tied it up in the fourth quarter with a six yard touchdown pass. Then, on Schabert’s third play of the game, he threw a 79-yard touchdown pass to wide receiver Lee Evans. The Badgers beat the Buckeyes 17 to 10. The crowd flooded onto the field.

WRN Sports Director Bill Scott spoke with former Wisconsin fullback Matt Bernstein about what the game meant for the Badgers.  Bernstein said, “You come in. You’ve been working your butt off, in the weight room, in drills. We had great leaders that year, you know Lee Evans, Sorgi, you know people who just never gave up…It was just so nice to win for Wisconsin.  You know there might be five or six wins that mean more than anything and I would say that had to be one.”

This game was the first time Wisconsin beat a top-5 opponent in 18 years, and the first time at home in 22 years.  The Badgers went on to finish the season 7 and 6 and played Auburn in the Music City Bowl.