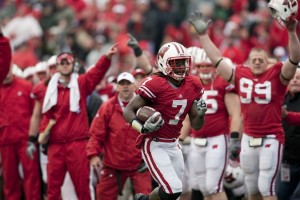 On November 13, 2010, the Badgers headed onto the field at Camp Randall to take on the Indiana Hoosiers without injured running back John Clay, who was the reigning Big Ten offensive player of the year.  It was a concern that didn’t end up being a problem. The Badgers made a scoring drive to open the game and didn’t stop there. They scored on 13 possessions, never punting and committing zero turnovers. Running for 338 yards on the day, with 598 yards of total offense, Wisconsin beat the Hoosiers 83 to 20, the most since the Badgers defeated Marquette 85 to 0, in 1915.

In his second career interception, junior safety Aaron Henry ran 37 yards for a touchdown.  WRN Sports Director Bill Scott spoke with Henry about that play and the rest of the game. “I think going into that game, our mindset was to go in there and win. We didn’t want to make it close,” said Henry.

AUDIO: Bill Scott talks with defensive back Aaron Henry about the game.

The Badgers’ 83 points tied the Big Ten record for most points scored in a game with Ohio State and Michigan State. Wisconsin went on to play in the Rose Bowl.