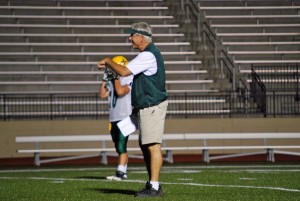 first round of the NCAA Division III Playoffs on Saturday (noon) in St. Paul.

The Green Knights will make their 10th overall NCAA Division III Playoffs appearance and ninth in the last 14 years.  The Green Knights are 1-9 all-time in the playoffs, and have won 14 Midwest Conference football titles since joining the league for football in 1984.

The Tommies are making their fourth straight and fifth overall trip to the NCAA Division III Playoffs.  The Tommies are 8-4 all-time in the playoffs and advanced to the national semifinals of last year’s tournament before losing to eventual national champion UW-Whitewater 20-0.

It’s the 3rd straight year that the two schools will meet in football.