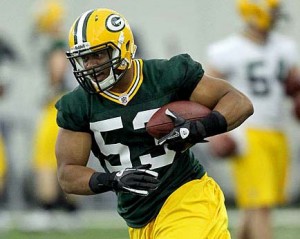 The Green Bay Packers made it official on Wednesday, placing 1st round draft pick Nick Perry on injured reserve after left wrist surgery.  Perry underwent surgery this week after trying to play with a cast for several weeks.

Tight end Andrew Quarless was moved from the physically unable to perform list to the 53-man roster, ending an 11-month recovery from two torn ligaments in his right knee.

Last year’s number-one draft pick, tackle Derek Sherrod was declared eligible to practice, giving him three weeks from yesterday (Wednesday) to get himself ready to play.

After three weeks, the Packers can either activate Sherrod, put him on injured reserve or cut him.

It was just a couple of weeks ago that coach Mike McCarthy said Sherrod wasn’t ready to start practicing.  Since then however, Right tackle Bryan Bulaga suffered a hip injury and the Packers are hoping Sherrod can help them this season in a backup role.