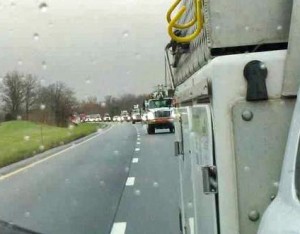 Utility workers from Wisconsin are on the front lines of superstorm Sandy cleanup. They’re helping to deal with the massive, widespread damage to the power grid caused by the system that swept across much of the east coast. Madison Gas and Electric spokesman Steve Kraus said a crew of six, along with a supervisor and three trucks, are in Hartford Connecticut as part of a mutual aid request. “Utilities east of the Mississippi have a mutual aid network already set up for disasters like this,” said Kraus, adding that it’s similar to the mutual aid agreements between fire departments in Wisconsin. The MG&E crew left Madison on Tuesday

Kraus said several tree crews from Madison are also out east to help with the cleanup. “The tree trimming crews are also coming from all over the country,” said Kraus.

Eight lineman from NSP-Wisconsin are part of a larger crew that the Twin Cities based utility sent to West Virginia. Some 30 employees of Wisconsin Power and Light are part of Alliant Energy’s largest-ever mutual aid deployment, involving more than 100 workers.

“Our folks have to deal with damage from high winds, ice, heavy snow and that sort of thing. Nothing there will be new to them,” said Kraus. The Wisconsin utility crews are scheduled for two-week assignments. Kraus said some MG&E workers were sent to the east coast for 11 days last year, to help in cleanup efforts following Hurricane Irene.

“The obvious reason for the two weeks is so that folks can come back, and try to put their life back to normal again,” he said Kraus said more help may be needed later, depending on the scope of the damage.